September 11, 2018
I don't know how to write about death without using words which have already been exhausted by intensive use.
I don't want to be original either,  it would be a terrible act of self-indulgence and ultimately psychopathic behaviour.
For short, I have no idea how to express what I feel whenever I hear of someone's death, especially when it is someone close. 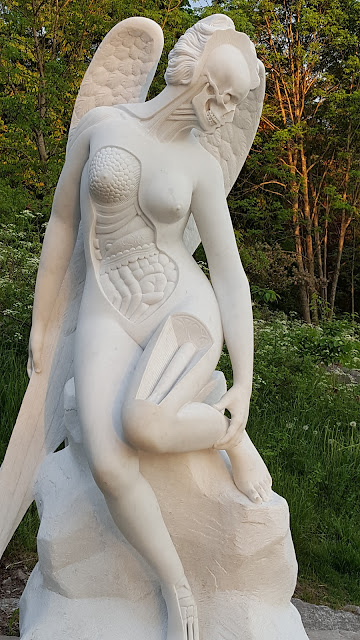 Am I saddened by their fate or mine? The realisation that someone is no longer within reach, be it remotely, always comes as a surprise.  It is hitting the same nerve, imaginary or not, that never learns.
Sudden deprivation, loss of a certainty, however vague and infrequently remembered, fear of one's own inevitable death?

No, fear is not the right word, although it has been mentioned by many as the dominant emotion when confronted with news off someone's demise.
There must be something different, heavily tinged, at times, with the guilt of not having made that phone call or visit.

Pre-death behaviour determines a lot of post-death reaction. People emphasise that they have spoken to the departed not long ago, sometimes just a few hours before it all happened. When there is nothing to recollect from recent encounters, much older memories are brought to the surface. A happy shared childhood or school years, help given when needed, no bitter conflicts.

As time has run out for any amendments to the story, the truth is within easy reach.
Paths crossed, lives rolled along parallel lines for a while, then ways parted. The impossibility of keeping up with everyone is not acknowledged. Denial of the inevitable?  The French were on to something when someone coined the phrase "Partir c'est mourir un peu".

Each death makes the world become smaller, till the walls finally close in.