The magic and curse of a new diary 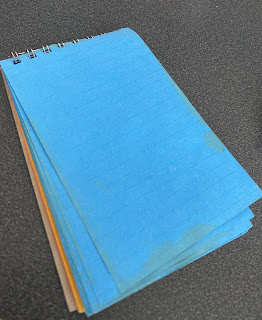 It's only mid-October, why are diaries and wall calendars already up for grabs?  There must be some inexhaustible demand for these memory aids and planning tools. Old style, of course, printed format.

Sure, the present moment can be quite unbearable or just boring. The unknown titillates imagination. Despite later disappointments, a jump into the future fascinates, subjugates and throws open the gates of possibility.

Possible is not equal to probable though. People who know the finer details of risk theories can explain the difference in marvellous ways. They also warn against mistaking one for the other.

For quite a long time, I have been blind to the fact that what is possible in general can be quite improbable in particular. Day-dreamers will understand. Naive ladies and gentlemen will do too.

We have been the ones buying a new diary each year and taking deep pleasure in filling in the first pages. Some of us, the adventurous-type ones, are going further. We write down reminders and events meant to take place many months down the line.

Then, through some weird twist of circumstances, the physical diary becomes a victim of habitual neglect. No amount of catching up at the weekend would be enough. The month of February is the easiest to write off, as it's (marginally) shorter.

Summer is inevitable blank, for obvious reasons, and before we know it, it is that time of the year again. Buy a new diary, a new wall calendar and even a new pen.

A quite predictable analogy is at hand: yo-yo dieting or exercising.

Stationery and gluttony can go well together. Acquire lots of beautifully crafted notebooks, sticky notes and highlighters in bright colours.

Decide then to be totally virtuous and use them to their full potential. Likewise, utter strictness in the first days of a new dieter gym membership.

Then lapsing into some childhood-aquired habits. Stealing cake. Giving up strenuous effort. Make the new diary disappear under a pile of urgent stuff that need sorting out. Maybe just cunningly let it slide under some heavy piece of furniture. Never to be seen until moving house.

Barely-used diaries have a major advantage over barely-observed diets. Waistline stays the same. It's also much much cheaper to give up on a new diary than renounce a new diet.

The most expensive leather-bound diaries costs less than shopping for all the good diet stuff, let alone throwing away the evil one.

The diary ends up on a recycling bin, one last virtuous gesture. Not enough to take away the guilt felt every time we abandon something.

We should know better. That's where good intentions stop. Next year, a good old tatty notebook, retrieved from the back of a drawer, will do. The probability of using it as a chronicle of days well spent is much higher. Hopefully.