Ambition drives us all 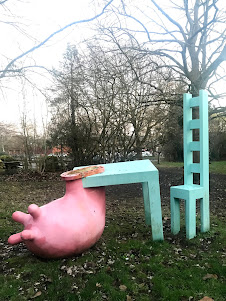 Good old reliable friend, the dictionary, is going to co-author this blog post. I would have posted its photo as well, but I was not too sure if it did not involve some copyright law infringement. Only half-joking.

"Ambition drives us all' sounds very much like one of those insufferable sweeping statements, forgotten as soon as read or heard. I am not aiming for posterity here, just to make a point.

A word's origin reveals its meaning better than long philosophical notes. Words, much more than people, are taken for granted because of their longer life span. Ambition is just an example.

It comes from a Latin word, ambire, which means to go around. Going around is not a particularly interesting pastime, and that's being polite. It is frankly quite boring, a feature compounded by its obvious aimlessness.

That's why no one goes around for any long period of time. Hidden or covert, there is an aim for being present one moment here and a bit later there.

In ancient Rome, moving a lot around crowds and places became associated with people who wanted to curry favour or just make themselves known, in case opportunity dropped from the sky. Or from someone in power. Also during the republic phase, in case elections for an assembly came up. Who has ever voted for a total stranger? Being known and liked has always been a pre-requisite.

Ambire as a verb gave birth to an adjective, the quality derived from the action. Ambitious started its own career and it suffered a lot from the negative bias of its beginnings.

There has always been a whiff of criticism when saying about someone that they are "really ambitious', as if desire is sinful in all circumstances.

Thankfully, language is never static and in the past decade or so ambitious became goal-oriented. It has no negative undertone, it sounds good.

Goals are something we understand.
To each human being their target, be it power in the big political arena or within the confines of a family. We are expecting a gain of some sort at any given point in our life and denying it does not make it disappear.

Ambition drives us all. Dixi.