The Arm and the Grabber (how could you do this to me, part 2) 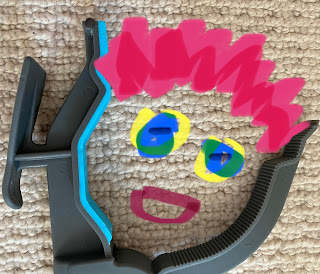 Picking up litter, piece of cake. Before The Arm's insurrection, of course, and implicit dereliction of duty.

A heavy blow to carrying out trivial tasks, like collecting various objects strewn all over the place (personal bad habit) or other people's leftovers (their bad eating habits, irrespective of age).

The Arm and its Hand used to be able to pick even tiny bits of paper or specks of dust fluff (but that's another story, the OCD one). Much faster than the vacuum cleaner and instant disposal, true?

Now The Arm is just hanging there, apparently recovering, although no traitor should be ever given the benefit of doubt.

It has been replaced by a tool mostly seen outdoors, where brave people do their best to keep streets and parks clean by cleaning after lazy people's rubbish.

Besides an increased sense of appreciation for cleaners' work, The Grabber comes with an unexpected benefit. It's a focus aid, it trains the eye and the working hand to turn picking up into a form of kinetic art.

Dropping anything is a chance to practise it. Minute movements can do wonders, rushing is totally unproductive. Grabbing successfully while manoeuvring a long stick with plastic jaws at the end of it, the joy of it!

It is a feat of coordination every time. When the whole operation fails, the only option is to kneel and get whatever needs to be picked up.

Feel somehow humiliated? Nah, it's a reminder to focus next time. Waiting time for consequences is shortened considerably, learning is speeded up. It may well make The Arm come back into the fold a bit sooner, as no one likes being replaced by an implement.