Which virus is more dangerous? 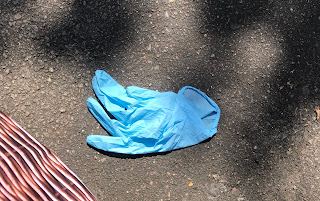 Lockdown reflections 1.3
Update: How could I miss that street litter can end up as ocean litter? *

There was a meme a while ago, widely shared, about people having to fight two pandemics: the corona virus one and stupidity.

I forgot about about the quip until I saw a disposable latex glove on the ground.  It's not that I have never seen other objects of personal use discarded nonchalantly in a very public place, like a street.
Condoms for example, although very very rarely (it can't be that comfortable, using a small wall as a prop, I'd guess). There have been as well the odd sock, a T-shirt, cigarette butts.
This is not fly-tipping  as such, we are talking small stuff, not humungous fridge-freezers or king-size mattresses. Small things do get lost or forgotten or thrown away.
In the middle of a pandemic though? A disposable glove of the type that has become associated with precautionary measures meant to defend us against the Virus?

I can understand someone's self-love and the "put your own oxygen mask first" mentality, we are all guilty of that at one point. I don't understand how something that has supposedly acted as an anti-virus shield is not treated as contaminated. It is worse than spitting on the ground.

Even if it's an innocuous latex disposable glove, it's still yet another bit of questionably degradable material, if degradable at all. Not worth researching now if latex turns into compost. Just wondering whether we are going to see more of the new street litter, blue gloves on the ground. Maybe not, but I would not put my money on it.